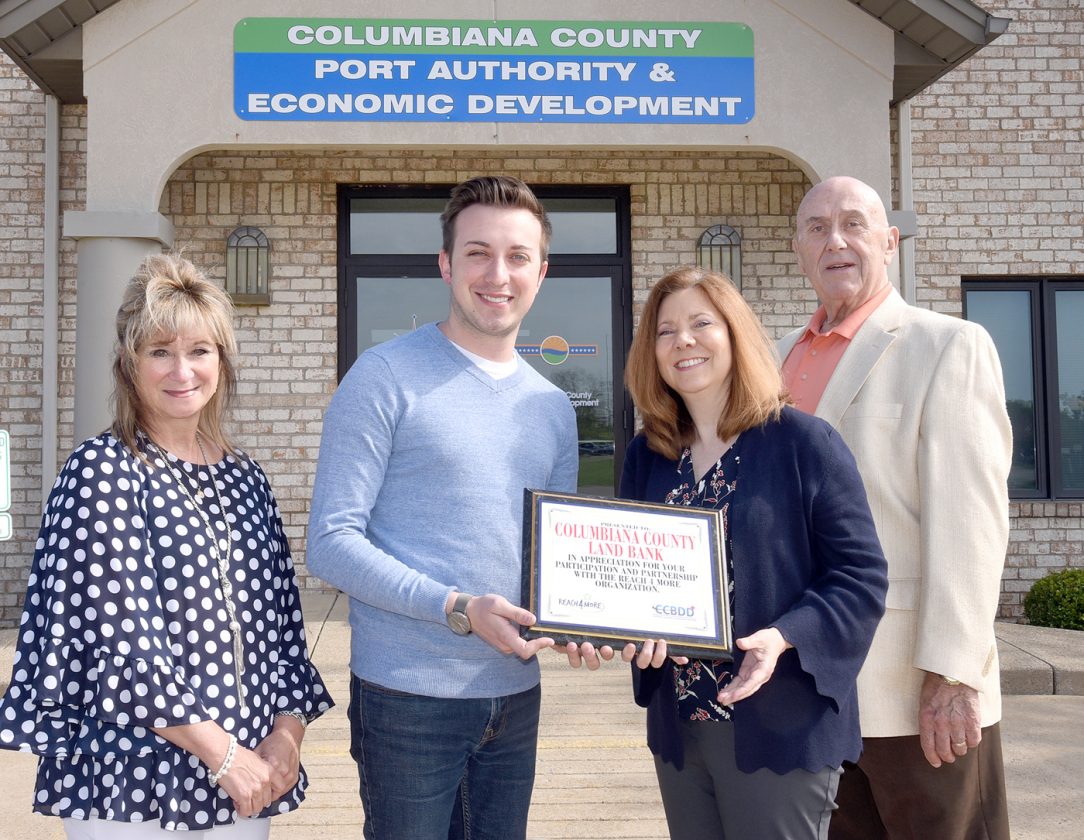 Posted at 15:09h in Uncategorized by aandric 0 Comments
0 Likes

Robert Ritchey, executive director of the Columbiana County Land Bank, is presented with a plaque of appreciation from Shirley Bowald and Paul Anthony of the Reach 4 More program. At left is Penny Traina, chief executive of the Port Authority of Columbiana County, which works closely (and shares the pictured new office facility in Lisbon) with the county economic development agency and its Land Bank program.

LISBON – The Land Bank of Columbiana County has demolished more than 150 derelict houses in the past three years, primarily in East Liverpool, Wellsville and Salem. Until ownership or responsibility for the cleared lots passes to someone else, the Land Bank must keep them clean and mowed.

“Whatever has been demolished, if the lot isn’t maintained, it’s not an improvement to the neighborhood,” said Robert Ritchey, Land Bank executive director.

For using Keeping It Trim, a mowing contractor from North Lima, Ohio, which hires employees with developmental disabilities, the Land Bank has been honored with a plaque from Reach 4 More, a program of the Columbiana County Board of Developmental Disabilities.

Keep It Trim currently has four employees with disabilities, Ritchey said. The company has been able to hire more employees and buy new equipment because of the Land Bank contract.

Since grant funding for the Neighborhood Initiative Program was acquired in 2014, 110 properties in East Liverpool, 49 in Wellsville, and 12 in Salem have been acquired. This spring, the Land Bank plans to demolish in the target areas an additional 16 buildings in East Liverpool, seven in Wellsville and one in Salem, with additional houses to be torn down in summer and fall.

Thirteen houses have been turned over for rehabilitation, and 68 vacant lots are being acquired through the mow-to-own program. The Land Bank remains responsible for keeping the remainder clear and mowed, said Ritchey.

“Keep It Trim has been great to work with,” said Ritchey. Last summer was the first year to use the firm. “We like to work with them and plan to give them additional properties to maintain this year. They have a good crew,” he said.

A staff of five at Reach 4 More works to place Columbiana County clients with developmental disabilities in gainful employment within their local communities. For more information about Reach 4 More, people may contact Shirley Bowald or Paul Anthony at 330.870.4272.